A catchup with John Williams and Nick Wilkins 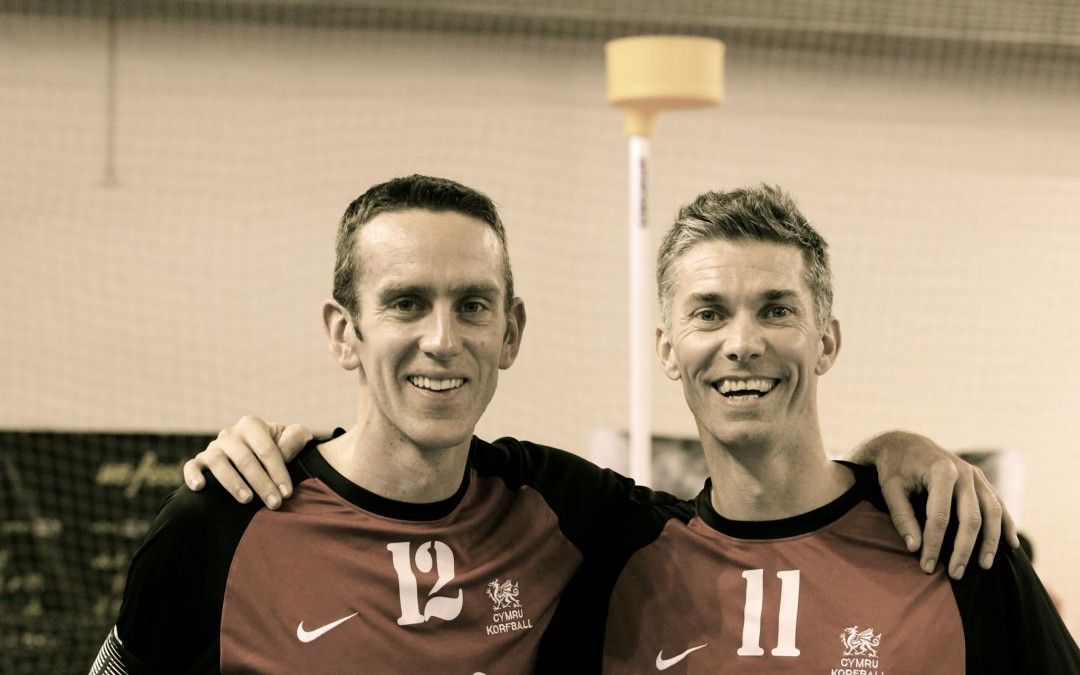 CR: Morning both. Right then, first things first, why don’t you let us know how you’re involved in Welsh korfball?

NW: Hey Claire, sure that sounds good. I got involved in Welsh Korfball when I first went to trials back in 2005 (wow that seems like a long time ago now), and have been involved in the international scene ever since. I’ve been representing Wales on the pitch since then. In 2014 we decided International Welsh Korfball needed a reboot, so John and I got working on an action plan to move things forward. From there the role of International Officer came up and I applied for the role on the committee. I’m still actively playing and am attending the trials again on September 6th – I’m still as excited now as I was back then.

JW: Hi Claire, like Nick I went to the trials back in 2005. 10 years (and 51 caps) later and I’m still here (they can’t get rid of me!) As a passionate Welshman, there is no greater honour or feeling than representing your country in your chosen sport.

CR: So you’ve both been there from the start! Over 50 caps each- that’s impressive in any sport. What’s been a highlight for you? Any funny stories you’d like to share?

NW: So many, and some I probably shouldn’t mention here! But I vividly remember playing in one of my first internationals against Scotland at a 4 nations tournament in London. I think it was the first tournament Wales competed at as an individual nation in korfball. Steve Jones was our coach then and he brought me on with 5 minutes to go when we were 1 goal up. As the time ticked by, I got strict instructions not to shoot, but hold onto the ball for the final 30 seconds. With 20 seconds to go I shot, missed and Scotland got the ball back. Looking over at the bench I can still see Steve kicking over chairs in frustration. Luckily, Scotland didn’t score and we won by 1 – but I received a lesson to listen to the coach after the game!

JW: Your shooting was / is pretty poor though!

NW: Ha – back in the day I did have a student mentality of running around like a headless chicken (who’s top goal scorer though John?:)).

JW: Yes, you are top goal scorer (if you include penalties and free passes) but we both know who the top open play scorer is.

NW: Lets not start this banter – the stats don’t lie!

JW: We joke, but we are both acutely aware that korfball is a team sport and every goal is a team effort.

NW: In terms of a highlight it has to be playing in the Europeans in 2010 under coach Dave Buckland, we had such a good team, great team spirit and everything went so well. I still remember going into every game with such a positive mentality – great times!

JW: I agree. It was a fantastic tournament for us. We bonded so well as a squad and that was reflected by the results on the pitch.

Just too many highlights over the years for me, but another one that stands out for me was playing in the opening game at the World Championships in China against China. For Wales to be at the World Championships was such a massive achievement and to be playing in the opening game in front of big crowd and live on tv was amazing. We lost the game, but singing the anthem at the beginning of the match with my team mates and friends still sends shivers down my spine when I think of it.

NW: Yeah in front of around 5000-6000 spectators! Can you remember coming back to the hotel after the game and seeing us on TV?

JW: Yes very surreal, especially as the only crowd we were used to playing in front of was whoever happened to be on the subs bench!

CR: So, Wales has been competing in International korfball since 2005. What’s new on the international scene in Wales? Nick, you say that you’re on the committee for the Welsh Korfball Association. What’s your role/what do you see as the priorities for the association this year?

JW: Well, one of the biggest and most important developments is the appointment of an International Officer. This appointment was crucial as it has brought focus and clarity to the direction of international korfball in Wales. Nick you have been appointed into that role, so I’ll hand over to you.

NW: Well, we really needed a reboot of the international scene; representing Wales remains a privilege to play and represent your country, but it felt that in-between major tournaments this had been lost somewhat and there was no clear indication of what it meant to be on the team, or how long that lasted for.

John and I were both very passionate about Welsh international korfball and started to approach the WKA about restructuring the international setup to be more professional and more organised. So I took on the role of International officer and am just in the early stages of putting some of our visions into place.

Moving forward we’ve got the biggest trials Wales have had since it all began on September 6th, some exciting new events and a new long term coach with a long term vision being announced shortly. In terms of tournaments, there’s a Home Nations tournament organised by Ireland at the end of September, but our most important goal has to be the European Qualifiers at the end of May next year – we need to finish in the top 4 to gain qualification for the Europeans later that year.

Most importantly though the whole emphasis of the new Welsh setup is not only top level korfball, but also feeding that talent back into grass roots level, and that’s my main aim – to achieve both at the top of the pyramid while passing down and inspiring the next up and coming players.

CR: I know trials for the international squad are coming up on the 6th September. What would you say to anyone who’s thinking of trialling but unsure of their ability?

NW: Do it! We’re selecting a fairly large training squad of 12 and 12, and will be concentrating not just on the ‘cream of the crop’ but also development. I want to remove the often perceived mantra that you have to be one of the best to attend the trials – if you’re passionate about korfball and have a drive to learn and improve, I wouldn’t hesitate to attend.

JW: Definitely come along, we really need a big base of players that we can develop over the next few years. It is fair to say that we have an ageing squad (a few exceptions) so new blood is most welcome.

CR: Maybe I’ll try out as well then! Are you both still as excited for the trials as much as you were when you first trialled? How long ago did you first trial out?

JW: You definitely should Claire. Wait there… can you catch? When Nick first trialled he really struggled with the basic skills of throwing and catching, but with my guidance and mentoring, he quickly picked them up. If he can do it anyone can!

NW: Ha, funny as always. I won’t mention the more recent defending posture you’ve adopted to protect your weak and slow legs John! How low is that back hand to the floor? Ha! I’m prone to mention your ‘route 1’ mentality of just running towards the post, throwing your hands up in the air and shouting for a penalty …. but I just have!

I first trialled at the first ever trials in 2005, I had just come out of the university korfball scene and was excited and passionate about getting better and playing more. 10 years later …. sure I’m still as excited. In many ways more so – it’s so exciting to see the new direction we can take with the international scene. I’ll be there raring to go on September 6th.

CR: It sounds like you have lots of plans for international korfball and I look forward to seeing how it goes. What about on a more local level? What’s happening in Welsh regional korfball?

NW: Yeah we definitely have, and I’m really excited for the future of International Korfball. On a more local level the whole Welsh setup is becoming more organised and structured, with Kevin Allen at the helm taking on the role of Chairman and doing a great job so far.

We’ve got some coaching clinics planned for the local teams from some top coaches over the next season, and the whole setup is being thought out from the ground up. Local level korfball within Wales is moving just as fast – Welsh Korfball definitely seems to be heading in the right direction.

JW: The development of korfball in Wales is crucial to the success of the international squad. We are competing against countries where players have been playing from a very young age. That gives them a massive advantage

Trials for the Welsh Squad are happening on September 6th in Cardiff, full information can be found on the trials page.