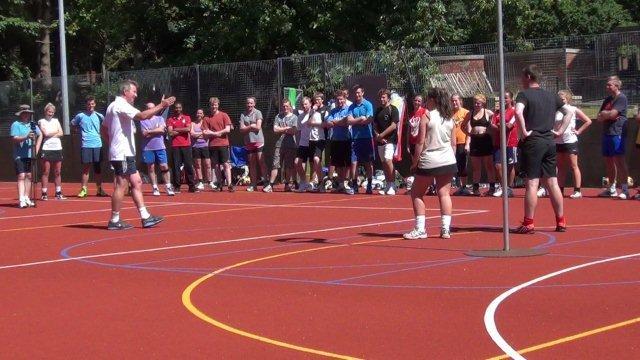 25 years on and over 400 coaches later, the Avon Tyrrell Level 2 coaching course is still winning the hearts and minds of the Korfballing community. Welsh Korfball is extremely grateful that the British Korfball Association and Max Buttinger who have provided this invaluable learning opportunity for everyone in the UK and would like to extend our thanks to everyone who has volunteered over the years. Many Welsh participants have taken part with 3 attending in 2012 and 5 in 2013. The WKA will always promote the Avon Tyrrell experience as it is the most well respected Korfball coaching course in the UK. The WKA fully support Max and his allies at the BKA with their aims of improving the quality of the UK Korfball coaching structure.

Originally set up in 1989 to support the growing demand and spread of Korfball through the UK University system, Avon Tyrrell trained 24 coaches in 2013, the largest number ever.

Unique amongst coaching courses, it totally immerses the trainee coach for 12 hours a day over 6 days, blending all that is great about Korfball with the demands of a high quality modern coaching course. It has never failed to give those that attend, often new to both the sport and coaching, the skills & confidence to take on the daunting task of coaching their clubs. The learning experience is enhanced by the kids camp that runs in parallel, and which also provides a bountiful supply of subjects for the coaches to practice on. 2014 will also see the 25th anniversary of the summer camp.

The atmosphere every year is magical with the participants this year rating their overall learning and enjoyment at an average of 96%. They said…

“It was brilliant having a range of coaches with so much experience.”

“I only wish that the course could last a little longer. Apart from that it was amazing.”

“The coaching task with the kids really taught me how to put all the skills together and to put the knowledge across in a fun way.”

“Variety of head coaches and tutors is a big plus. Having time to talk tactics and rules with other coaches and players builds confidence.”

The Buttinger and Palfreyman families have been at the heart of organising this amazing event for the past 25 years. But none of this would be possible without the immense support of an army of volunteers, that turn up year on year, and just get on with it, knowing exactly what needs doing. Thank you.

Tutors and assessors come from all around Europe and in the past have included: Rob Lof, Jelke Nijboer, Durk Geertsma, Pieter Van Houwelingen, Karen Wildin, Nigel Etheridge and Charlie Vogwill, plus many more guest appearances and support volunteers. We thank them all for giving their time so freely.

Finally a special thanks to Philip Buttinger, course coordinator for the last 21 years; Karen Palfreyman, summer camp director for 23 years; and to Ilona Buttinger, Steve Palfreyman and Penny Buttinger for making over 300 meals every day.

The Level 2 course has changed a lot over the years. Standards have been raised year on year through more stringent pass criteria and increasing the quality of instruction and assessment. The target for 2014 is to raise the standards even further by redesigning the programme to be more modular, so it can be delivered in a residential format or over several weekends.

Greater rigour will be introduced so that the Level 2 qualification is aligned with the requirements for UK Coaching Certification (UKCC) which is recognised by the UK Government’s Office of Quality in Education. Tutors will undergo more formal training and the course material will undergo a major overhaul.

Once completed, the home nations and their own Coach Education Working Groups can decide on how to deliver the course and whether to convert the course to a UKCC National Qualification recognised by Ofqual.