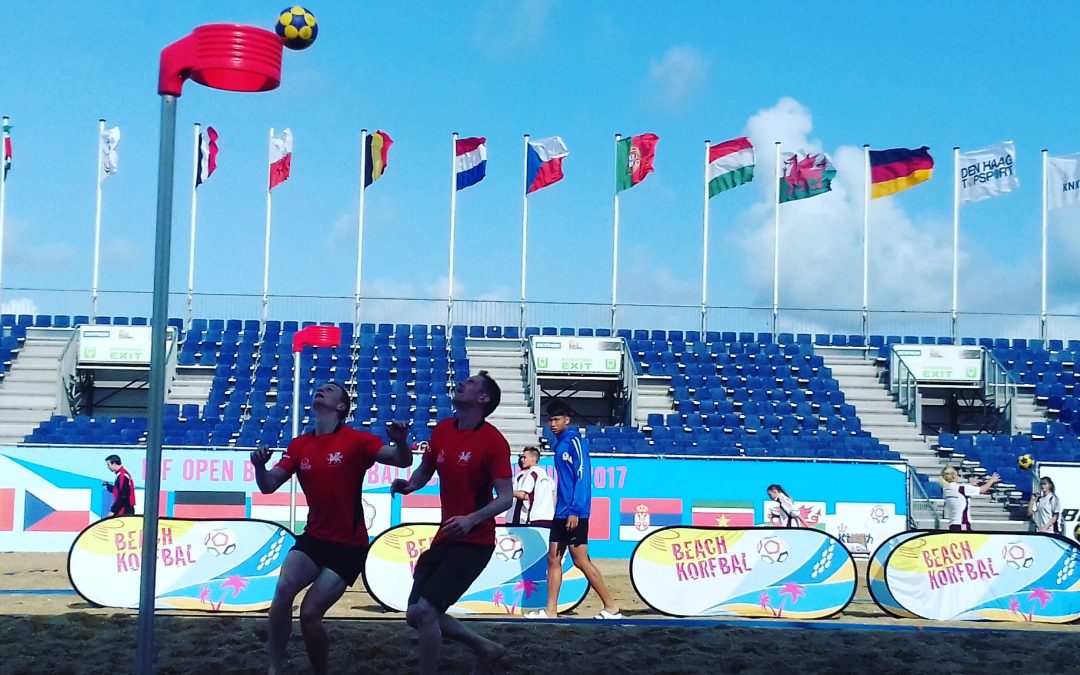 Day 2 of our Beach Korfball adventure and we finally got to play some Beach Korfball! We headed over to the impressive Hague Beach Stadium to get the tournament underway.

This was not only the first ever international beach event, and the first for Wales, but courtesy of some borrowed vests from the KNKV it was also the first time Wales have competed in blue! This made it difficult for our supporters to find us as they were expecting our usual red strip.

Eventually the crowds arrived, mostly sporting daffodil hats and Wales flags, and our opener against Portugal began. It was a tense affair with both sides struggling to get going, with Wales in with a chance for most of the game. In the last quarter Portugal opened a gap to win 5-3.

Next up was Belgium and we were hoping to limit them as much as possible. Unfortunately they proved too strong an opposition and the match ended 14-2. As none of our squad had played beach korfball prior to this tournament we took stock and analysed our tactics ready for the next group match.

Germany were in a similar position having lost twice by similar margins. Wales started strongly going 3-1 up, but Germany clawed it back to 3-3 at half time. The second half was close but Wales fell at the final hurdle as Germany clinched a 5-4 victory.

We actually thought we were done for day and started packing up, only to realise the quarter finals were that afternoon and we had to face Hungary.

Tired legs and a lack of experience saw the Hungarians exploit our weaknesses to score a convincing tally of 14 to Wales’ 4, a disappointing end to the day. We were heartened to hear we had World Games silver medalists Taiwan to face the next day…

The chair of Welsh Korfball paid us a visit, having been in attendance at IKF meetings, and we also bumped into former Cardiff Dragons superstar Remco Broekhuis.

We headed back to shower and find food. Helen unfortunately was suffering from sun stroke so missed the dinner, but after checking she was alright we found an Italian which would allow us to load up on carbs for the next day.

We headed back to check in on Helen instead of venturing out into the city to see the fireworks, and had a few drinks over the pool table downstairs.

Another long day of beach korf fun in the sun ahead of us, follow the action at www.beachkorfball.ikf.org