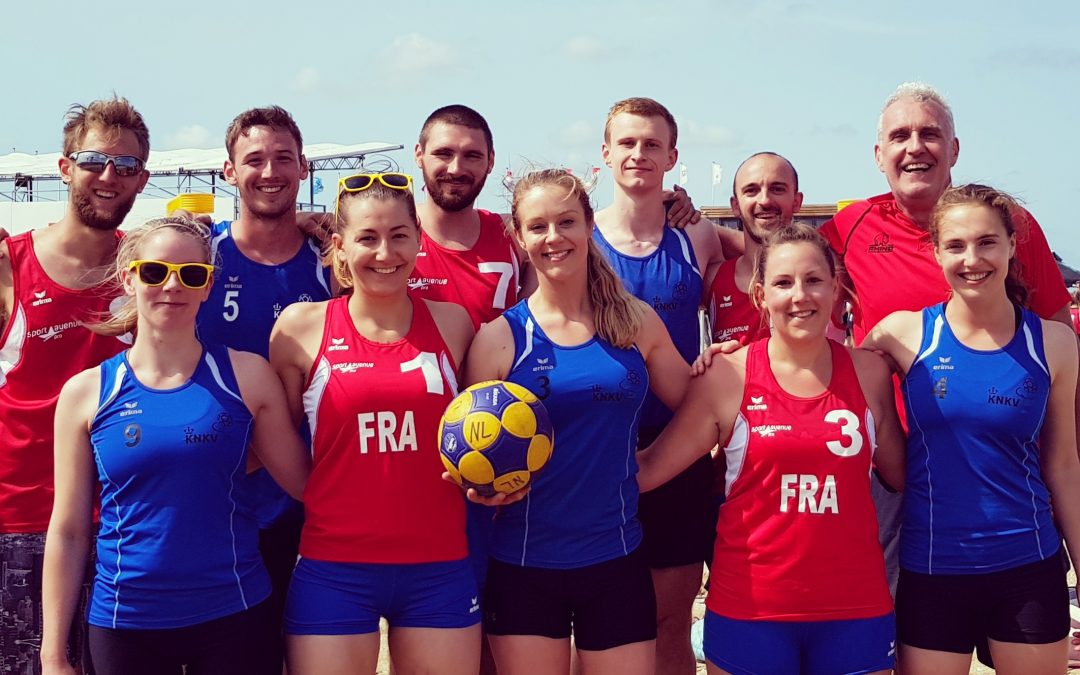 The last morning of the IKF European Beach Championship saw us face recent World Games silver medallists, Taiwan. This was another first for Wales and we started strongly but couldn’t keep up with their scoring, as they raced ahead to finish 9-5 up. Our final match would be against a “World Team”. We weren’t sure where they came from but they were good, and it proved a tough final match. As they were replacing the spot of a country who withdrew, and were playing out of competition, this game did not count towards the tournament results.

Overall it was a positive experience, and we will look forward to seeing how the IKF improve the new discipline of Beach Korfball over the coming years. Hopefully it is something we will see played more regularly in Wales and the rest of the UK. Despite not winning any games at this event, we’ll be looking to get some beach practice done prior to the next one (and we still came above Scotland, Ireland, and England as they didn’t enter!)

Having finished up our tournament, we sought out the French team who had also finished, and challenged them to a korfball friendly on the pitches outside the stadium. After some gesturing and faltering attempts at French, they understood and we all headed out to the pitch. This was probably the most enjoyable match of the weekend as the pressure was off and we had learned some tricks, so there were many great goals scored on both sides. We got slightly carried away and played for nearly half an hour non-stop, instead of 6 minute halves like the tournament… but it was the perfect way to end this part of our trip. As coach Brady says, make sure you win your last game!

The only thing left to do was enjoy our final evening in The Hague, so we fuelled up at a Dutch restaurant and then headed to Crazy Pianos, to enjoy some live musical entertainment. Despite repeated requests, Tom Jones was not played. So we walked down the promenade singing Delilah to compensate for it. I have it on good authority that someone has a video stashed somewhere of this.

We stopped at BooNooNooNoo’s, a seaside bar with fire pits, large vases, and a waiter who spoke very good English – he may have regretted this after being bombarded with questions about the vases. Then back to Refill to play pool with the locals; it was at this point that some of the gang called it a night whilst the others headed to Pepper & Salt with the Dutch, who promptly bought them a round of drinks and got the bar staff to play a medley of Tom Jones songs. Night complete.