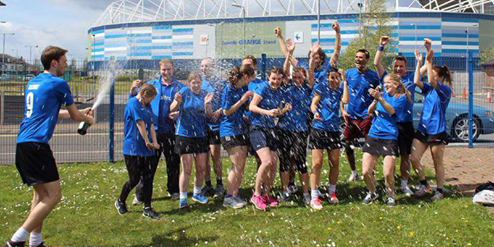 After a closely fought season where the result came down to the final day of matches, Cardiff City have emerged as the Welsh League Champions for the 2015-16 season. It is the first time since 2013 that Cardiff City have earned the title, and the club is looking to push on at play-offs to potentially return to regional level korfball.

It was a titanic effort from, currently, Wales’ smallest club but we hear rumours of expansion to two teams from next season and it looks like Cardiff City are back to being a competitive and lively force within Welsh Korfball. MVP (Most Valuable Player) awards were given to Ian Russell and Julie Prosser, who was the top female scorer on 41.

Raptors finished up another impressive year by taking the runners-up spot for the second year running. It has to be mentioned that the club has fielded three teams across all competitions this year and as has tried to create three separate squads. Whilst there has undoubtedly been some crossover, Wales Korfball commends their efforts to continue the growth of their club and Raptors 2 earned fifth place on the last day of the season, showcasing the teams development throughout the year. MVP awards went to Hayley Hanson and Steve Fung; Fung also secured WKL Top Scorer with 45 goals.

Cardiff University experienced huge success with their teams in BUCS and the Western Regional League. It is understandable that with the focus elsewhere they did not perform as well in the Welsh League. Nonetheless, third, fourth, and sixth with many hard fought games. Cardiff University 3 were still fighting for fifth up to the last game of the season, when it finally slipped through their fingers. We look forward to seeing the new talent from the club next year. MVP awards to Dax Baker (46 goals across three teams) and Verity Marsterson who coached the third team and represented the firsts.