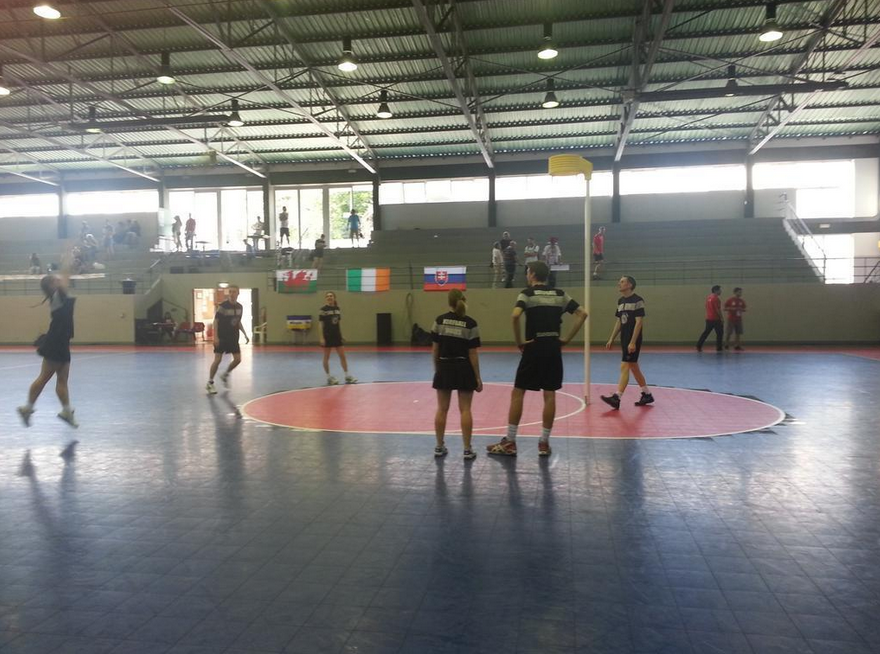 After an intense game of Mafia the night before everyone was delighted to wake and find that none of their teammates had suffered a gruesome end in the night. Music channel VH1 has almost convinced us that it is all about that bass.

Breakfast received a good verdict and the squad got together on the party floor for a team meeting. With formalities taken care of, and Rick managing to fix the vent Ruth had broken the night before, we showed the rest of the squad round the corner to the supermarket.

Nick took his chances with the traffic as the boys threw a mini-rugby ball around. After we had stocked up on supplies we returned for lunch with the England squad. Early preparations began for our Serbian encounter by invading their personal space in the lifts. Ruth lead the charge declaring “it starts now!”

We caught the end of the Scotland match as we arrived and then met Graham for our team talk. The warm up went smoothly and the starting 8 lined up to take the court. Captained by John, Wales was represented by Nick, Kev, Ramz, Carla, Bath, Hannah, and last but certainly not least Ruth.

The Portuguese announcer had other ideas and thought Graham had made a mistake in leaving Laura out of the line up. Such was her determination to get her on the pitch she called out Laura’s name three times. Graham managed to sort out the situation and we swiftly had the right names announced. The pre-match drama wasn’t over though as we waited in silence for our national anthem Hen Wlad Fy Nhadau to begin… Suddenly one of the organisers realised the sound was off and promptly turned it on half way through the first verse.

Finally after all of the confusion we managed to get the game underway! Unfortunately the IKF did not stream it live but they did film it anyway so hopefully we’ll get that up soon. If you were following the updates you’ll already know it was a tense affair with neither team extending a comfortable lead.

Both sides played a fantastic game and Graham made two changes to bring James on to add some more height to the equation. Julie joined the fray to score instantly pairing up with her Celts teammate. Kev scored a couple of great goals but Ramzi stole the show with six!  The Welsh girls showed their quality bagging a shed load throughout the game. Ramzi’s boy even had to go off due to a blood injury.

The match was finely balanced with 4 goals in the last two minutes to take it to golden goal. Unfortunately it wasn’t our day and the Serb’s took the match with a superb long shot. We gave it everything we had. It was an agonising end but we win and lose as a team. There are no names on the back of our shirts, one Dragon on the front and fire and passion in our hearts. Wales fought hard and deserved the point we earned today. Respect to the Serbians for giving us such a good game.

We were rushed over to the main hall for the opening ceremony of the competition and then we headed back to the hotel for an early night. At dinner we were treated to another tale of a snake attack in Julie and Ruth’s room – apparently the shower head has a mind of its own.  Ramzi’s dancing is steadily improving. By the end of the week he might show someone other than his room mates! Beth implored me to include my man crush on a certain Portuguese player in this blog. He’s about 7ft tall and I swear if he timed his jump right he could dunk in the korf post…

We are now looking ahead to Turkey tomorrow! Nick was even bought a beer by the referee of our match! He Might start missing more penalties from now on…