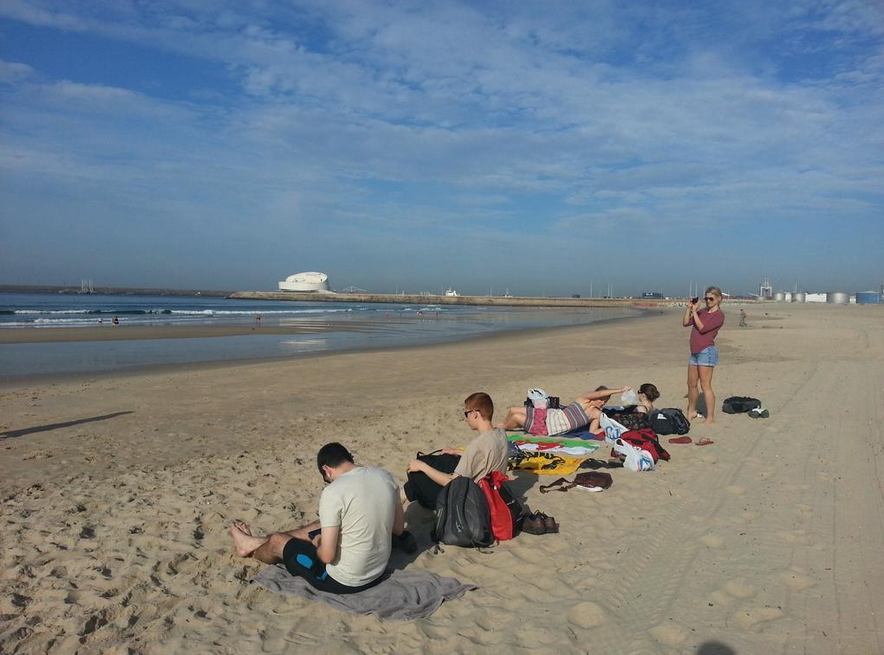 It was an early start for Wales, although James thought a lie in would be more appropriate, appearing 10 minutes later than the rest of the team. After Laura complained to the waiters the day before about the size of her tea cups, we were pleasantly surprised by the oversize soup bowls on our table for tea and coffee.

It was ‘day off’ day for the tournament, and with us being so close to the wonderful Portuguese coast, we all headed into our taxi’s for the 15minute ride to the beach. After Ruth’s singing got quickly replaced by the taxi driver turning the radio on louder, we arrived at the sandy sunlit coast to the sound of lapping water, and sights of surfers and ice cream stands. After various games of ‘hide the flippy floppys’, shoe ball, and recreating Caerphilly castle out of sand, James lost the animal game having to Turtle his way around the team, doing a wonderful re-inaction of this majestic animal. Only 5 team members found themselves in the cooling waters of the Atlantic Ocean, the rest of the team being worried about ‘mafia sharks’ from the previous nights game night.

A short hop back to the hotel and it was soon time for training, a fairly easy relaxing affair allowing the players to get their eye in, and prepared for tomorrows training and game against Poland.

Evening arrived and with it the team relaxed with cards, tv, chats and general downtime. Games master Nick starting the magic door game that allows kittens but not cats, beer but not cider and apples but nor pears through, while Jo and James showed their mental connection with some mind reading skills.

It was a good day off, both mentally and physically for the team, and as the moon climbed high in the sky over another warm twilight, the team started to focus on what will prove to be a decisive game against Poland the next day.