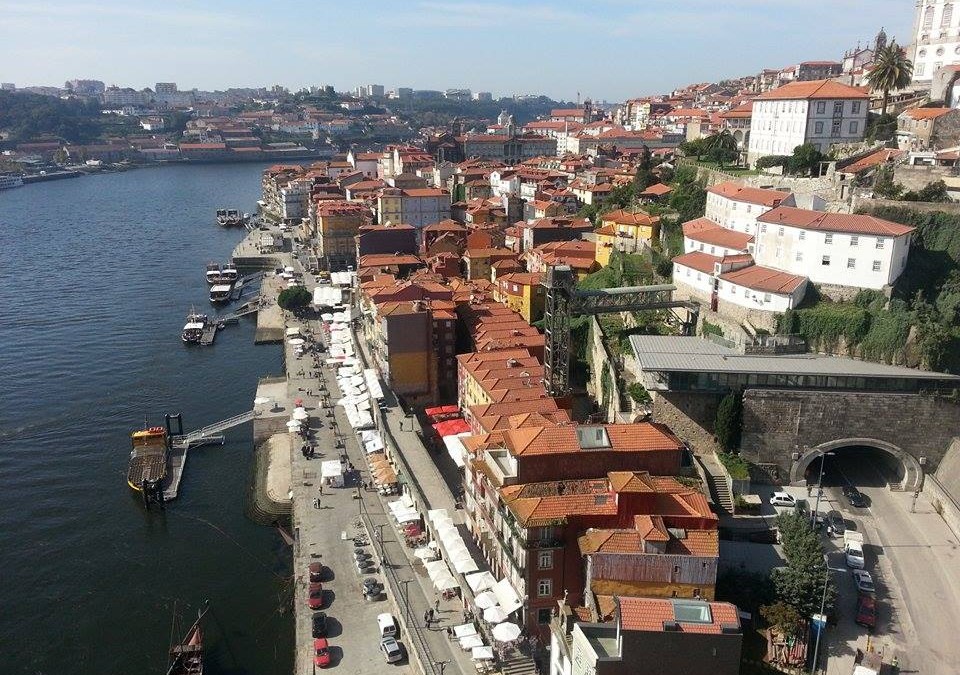 We had a later than usual breakfast at 9 before venturing to the picturesque city of Porto. A short walk and tram ride from our hotel found us in the heart of the town. A Friends quotes contest was swiftly won by James standing in his map from the tourist centre to locate the river.

Using this unconventional method we decided to follow Ramzi instead, who led us straight to the waterfront where we stopped at a cafe for refreshments. Corinne Buckland and Sara Roberts from the England group passed by and we soon found the Warriors on tour when we clambered up to the steel bridge spanning the river.

We continued exploring the city and had lunch further inland whilst Rick went in search of hotpants. That’s a lie, he was looking for shorts, but we really hoped all he would find would be hotpants…

G Box was elsewhere enjoying a lunch with Beth’s parents and promises he has plenty of info for our blog from his experience! Good work, Graham. As usual I was ridiculed for not inhaling my food. It’s a running joke that I take about twice as long to eat as everyone else. With Ruth and Laura stealing from my plate I’m starting to think if I don’t eat fast I’m not going to eat at all… I also don’t share food. Credit to Josh for some great Friends jokes.

We returned to the hotel and chilled for a bit before the game. Some of us went to the hotel spa to see if we could play water-korf but unfortunately the staff weren’t game for it. Graham admitted his first alcoholic experience led to him climbing, and sliding back down, a snowy mountain in Europe singing Jungle Book songs. I told him that would go in the blog and he said he knows a great way to get benched… I’m taking a big risk here to bring you this news!

So we headed to the match at the main hall without a water warm up but in high spirits. Today Carla lead the team as captain. G Box selected Kev, Tom, Rick, James, Laura, Jo, and Bethan. Credit where it’s due the Warriors had a sign for Welsh superstar Jo Nash which read “Welsh NASHional Hero!”.

The squad went behind but battled hard to bring it back to 9-9 at half time. Wales went ahead in the second half 11-9 and then again at 13-11 but the Serbs pulled ahead to win 15-18 after a host of Welsh changes.

John earned his fiftieth cap but forgot his underwear and brought a bathmat instead of a towel. We don’t want to embarrass him further but we are going to be shouting happy fiftieth for the rest of the trip.

The Serbians sang a lovely chant on the coach back to the hotel so Laura decided to start a chorus of the wheels on the bus go round and round straight afterwards. #littlevictories

We went to the bar again at the hotel, after a solid meal, and made some plans for Halloween… All will be revealed in tomorrow’s blog!

Graham told us another great story about how he once dated a girl in Portugal called Armenia and then one in England called Georgia… He is still looking for a girl named Azerbaijan.

We have another guest blogger lined up for tomorrow. Originally Ruth was suggested but we thought the blog might end up too LOUD. So our mystery blogger will be announced tomorrow!