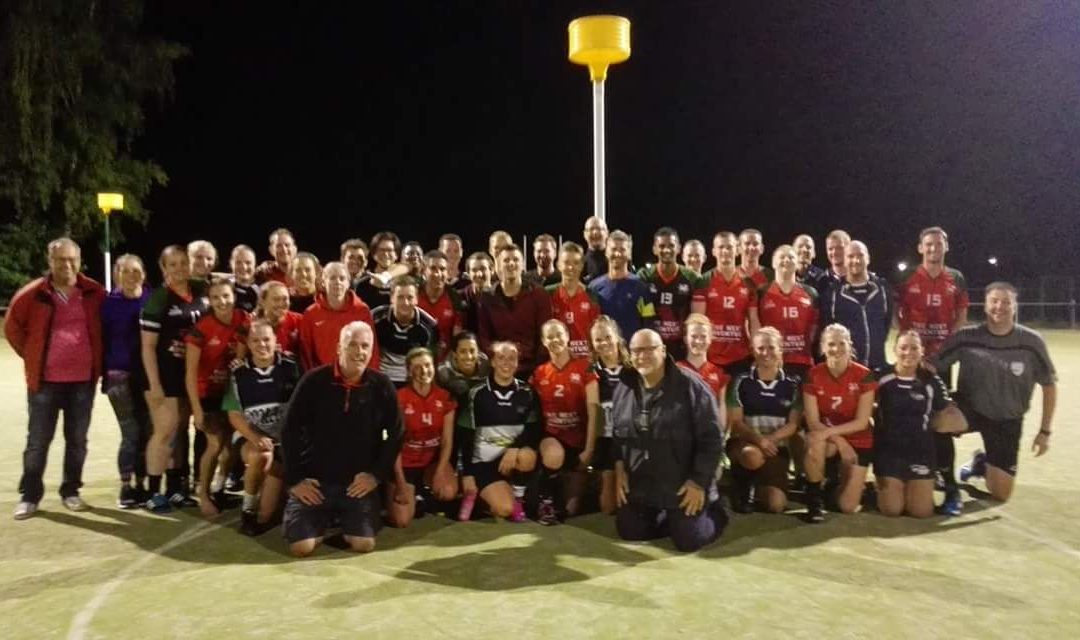 We visited Michiel’s club house, the “Nic. Nest”, for a training session this morning. Naomi offered to get us warmed up with some recovery exercises, which actually left us needing more recovery than when we started. Press ups, planks, and sprints were not what sprung to mind when we heard “recovery”.

We acclimatised to the outdoor environment and the astro surface. Some people more than others as James slipped immediately after walking on and trying to flick up a ball (never kick korfballs, kids). Chris also had a slide and skinned his knees, and John headbutted a post.

At the time of writing, John provided us with an exclusive interview of this harrowing moment. He told us “Nick was holding the post, which as well all know is illegal. I was between Nick and the post.” At this point Nick interjected.

“He was.” John retorted. “I was about to get the ball to score and go two-nil up, when BOSH. Now I look like a member of Kiss, and he didn’t apologise.”

Nick sidled over for the last word, “John ran into the post, and I did apologise.”

We had lunch in the clubhouse and Naomi was keen to get everyone involved in a game of darts. The atmosphere was soon punctured by woops and exclaimations, with the crowd parting to reveal a stunned Osian holding a dart, for Naomi had killed him (Murder Game) by handing him a dart, in the clubhouse! One down, twenty two to go.

Most people headed back to the hostel, and Osian road back a broken man to contemplate his trusting nature. Helen, Chris, and James headed nextdoor to the “Nic. Nest” to try out the outdoor swimming pool. They were delighted to find slides, diving boards, and floating balance beams and were subsequently entertained for much of the afternoon. The remainder of the group split off to various bars and cafés to relax and play cards with Marjolijn Kroon who joined us for the afternoon.

This evening would see us play 4 x 30 minute training matches against EKC 2000. We got there early to watch the Nic. Junior training beforehand. Marjolijn came along to support at the clubhouse, and Ruth went into fangirl mode asking for a photograph, a hug, and for her to sign her baby, all in the space of about ten seconds. In her excitement, she tried to kill Katie (Murder Game) with a trainer, outside, and nefariously used her baby. Unfortunately she dropped Ariana’s shoe only for Katie to hand it back rather than take it, so the attempt was unsuccessful!

Zoe forgot her astro shoes for the match. So she cycled back and made a video documentary of her dash. The editors at Welsh Korfball are trying to obtain the footage.

All the squad members enjoyed the experience against EKC. Tom and Michiel teamed up to coach the Wales players. In the final match it was a tense affair throughout with the end score reflecting that, as the scoreboard read 19-19.

We returned to the hostel and headed to bed as we had an early start the next day. Stay tuned for more! Oh, and Dan arrived. Aka the better Williams.