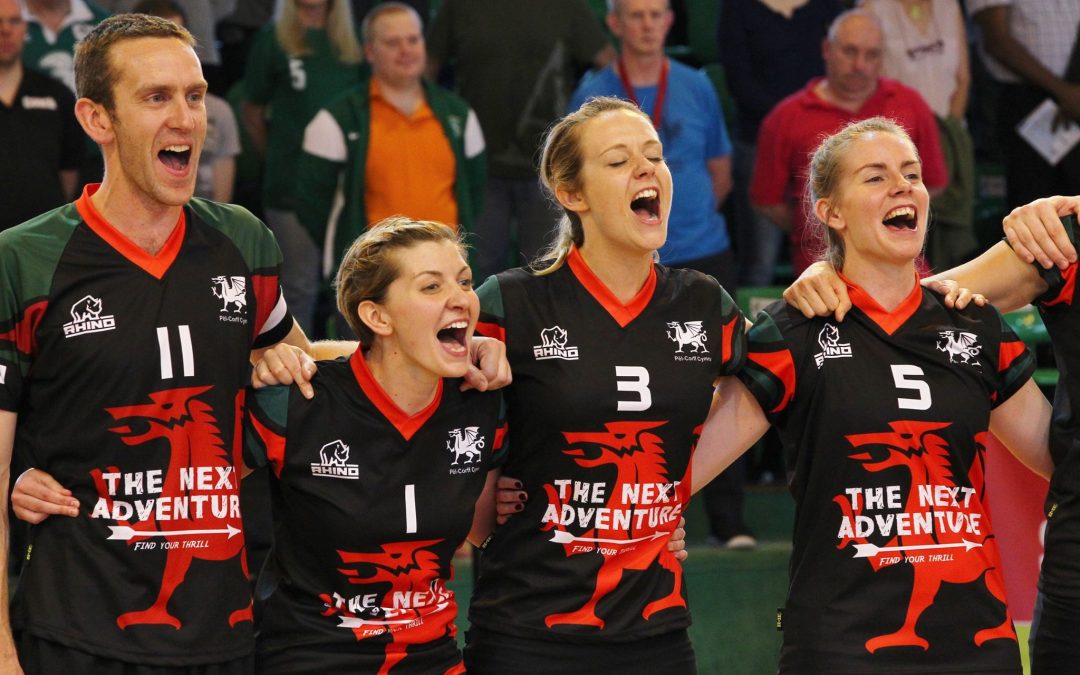 Last weekend, Wales competed at the 16th International Korfball Tournament in Stadskanaal. In Wales’ group were Armenia, Tus Wesseling (Germany), and KC Tokyo (Japan). The group stages were an opportunity to try out new combinations, with coaching team Brady and Beale bringing new players into the squad in the form of Gareth Clarke, Helen Davies, and Osian Nixon.

Wales opened their tournament with a 9-1 victory of the Armenian national team, in what proved to be our lowest scoring match of the tournament. This was followed up with a meeting against German club side Tus Wesseling, in which Wales put on a dominant display in the first half to enter the break 9-0 up. Changes were made for the second half and Wales took some time to settle down and complete the victory, allowing the Germans back into the game for a final score of 12-6. In the final match against KC Tokyo, Wales were prepared for an exciting looking Japanese outfit and went out all guns blazing. Everything came together for us in this match, and a 17-6 win saw Wales through to the final in spectacular fashion.

Who else would Wales face in the final, but the old rival, Ireland? The two sides have met eleven times in the last decade for full international matches, with Wales winning nine of those. However, history plays no part in the present and Ireland presented an exciting challenge. Another nation with fresh players, backed by experience, it was sure to be a tough encounter.

With a strong start, Wales went ahead, but the game was hard fought throughout with Ireland often holding the lead. In the closing stages Ireland were two goals up, but Wales clawed their way back to one; in the dying seconds a penalty was earned by the combination of Ruth Campbell and Jo Nash. Rick Scowcroft converted this to take the match to penalties.

The penalty display overall was not the most clinical, with both teams missing and scoring in equal measure. It was the side in green that held their nerve to retain their title. The two sides were destined to meet again in an international friendly, the very next day… The coaching staff had an ace up their sleeve for the Sunday, in the form of Dutch legend Michiel Gerritsen, who arrived to join the coaching team and inspire the side to victory.

Wales once again came out firing for this full-length match, and raced ahead, 3-0. Wales had the better of it in the first half and increased their lead to reach the half-time break in a comfortable position five goals ahead of Ireland. Strong shooting from the Welsh girls was giving Wales an edge. In a repeat of the German match the day before, Wales struggled in the second half as Ireland adjusted their tactics to frustrate the Welsh attack. The Irish pulled the match back to within two goals but couldn’t bridge the gap further; Wales clung on for a nail-biting win, 16-14, in front of the crowds at Stadskanaal.

It’s always a fiery encounter between the two Celtic nations, and we are sure there will be more exciting clashes between us in future. Leo Comerford was awarded ‘Most Valuable Player’ for his three goals and dominant supportive role in the match.

Looking at the records sheet, this match brings Ruth Campbell to within 1 cap of the 50 milestone! Carla Bennett has now played 38 games in a row for Wales, with Bethan Phillips on her heels having played in the last 23! James Wilcox captained the Wales team for the first time, and the debutantes all bagged their first goals in a Wales shirt this weekend.

It was a promising performance from the squad, as Wales begin their two year campaign to prepare for the 2018 European Championships.