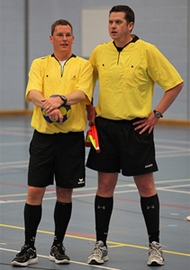 Wales Korfball is delighted to announce that Steve Jones has been selected by the IKF for the European Korfball Championship in Portugal.

Alongside Jones, Paul Jeanes of England has also been appointed for the competition. Both regularly referee in the England National Korfball League. Steve Jones refereed the last IKF World Championship final in China, 2011.

Commenting on the news of his selection, Steve Jones said: “All referees want to officiate on the highest stage, so it is a great honour for myself and Paul to be selected once again to referee at a major IKF finals.”

The European Championships will take place between Saturday 25 October and Sunday 02 November 2014 in Maia, Portugal. The Welsh Korfball Squad will be flying out on the 24th to compete in what will be their second European Championships. In 2010, Wales achieved 11th place out of 16 nations.

The WKA have been extremely pleased with the appointment of former Great Britain player (1979-85) as Head Coach. Box lead the Great Britain team to 5th at the 2002 European Championships and recently confirmed the Wales Squad which he will be taking to Portugal:

Wales will face Poland, Turkey, and Serbia in Pool D.